Iridium Communications is nearing the end of its two-year campaign with SpaceX to place 75 Iridium NEXT communication satellites into orbit.  The company has launched 65 of those satellites to date, with the final 10 scheduled to launch on a Falcon 9 from Vandenberg Air Force Base, California, before the end of the year.

The completion of the launch campaign will purposefully leave six NEXT satellites on the ground to serve as launch-replacement spares should they ever be needed over the life of the new constellation.

NASASpaceflight’s Chris Gebhardt sat down with Iridium Communications CEO, Matt Desch, to talk about the Iridium NEXT-8 launch campaign. 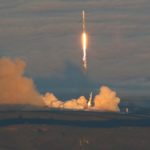 Other Iridium NEXT News: