Conditions in the ocean and the atmosphere are conspiring to produce a less active Atlantic hurricane season than initially predicted in May, though NOAA and FEMA are raising caution as the season enters its peak months.

“There are still more storms to come – the hurricane season is far from being over. We urge continued preparedness and vigilance,” said Gerry Bell, Ph.D., lead seasonal hurricane forecaster at NOAA’s Climate Prediction Center.

Seasonal forecasters with NOAA’s Climate Prediction Center have increased the likelihood of a below-normal Atlantic hurricane season to 60 percent (up from 25 percent in May) in the updated outlook, issued today. The likelihood of a near-normal season is now at 30 percent, and the chance of an above-normal season has dropped from 35 percent to 10 percent. 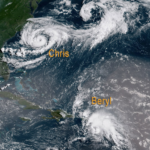