A hurricane bringing 130 mph winds and the risk of devastating storms, rain, and floods to the US has strengthened to a Category 4 storm.
Hurricane Florence strengthened to a Category 4 about midday Eastern Time on Monday, the National Hurricane Center (NHC) announced.
It was poised to make landfall early Thursday somewhere around North and South Carolina and is likely to keep strengthening as it approaches. Those two states, as well as Virginia, have declared a state of emergency as they make preparations.
The NHC said on Monday morning that the storm could remain powerful as it passes over the US mainland, and could penetrate as far as Pittsburgh. It also warned of a “life-threatening freshwater flooding” and “exceptionally heavy rainfall” over the East Coast. 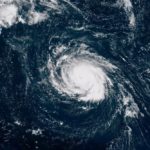